skip to main | skip to sidebar

I've already touched on Frank Gehry, I.M. Pei, and a few other famous architects a few times. But I want to give a greater representation of their work and what it contributes to (or takes away from) the community. We start with Oscar Niemeyer.

It's been said that Oscar Niemeyer can design his buildings in an hour. This was meant as a compliment, although one could certainly take it as a reflection of the lack of seriousness in his work.

It has also been said (by Niemeyer himself) that his buildings comment on politics, economics, and the culture as a whole. This is certainly true. But what do his buildings say? And how do they impact the community? Those are the important questions.

One of the answers is that there is very little comfort in his buildings. Instead, they confound the middle class and please the elites who have attached themselves to interesting buildings. Of course, what is interesting today is boring tomorrow. What is trendy today is dated in 20 years.

A UFO that landed upside down - the Niterói Contemporary Art Museum in Rio de Janeiro, Brazil. 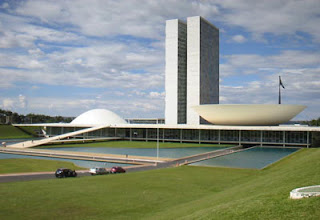 A lifeless scene in Brasilia, a city in a country that is full of life, and a city that Niemeyer helped plan and design. 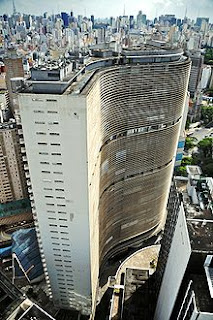 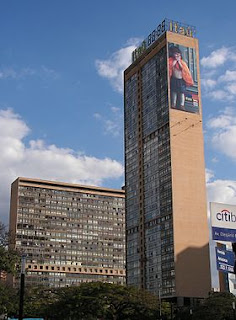 A Soviet building in the communist east, or the JK Building in Belo Horizonte, Brazil? It doesn't even matter.

And there you have it! A sampling of what Oscar Niemeyer, a celebrated architect who never met a concrete truck he didn't like, has contributed to this world.

According to the American Conservative, beautiful churches are back. See the article here.

I'm not so optimistic, and for a couple reasons. First, the article touches on mainly Catholic churches. Though there certainly is a movement towards the construction of beautiful Catholic churches, the traditionalists have to fight against the movement to construct more modern and post-modern structures (like the Cathedral of Our Lady of the Angels). There's no telling which side will win, and over the last 50 years, beautiful churches have lost to sterile and modern designs.

Second, what of the evangelical community? I challenge you to find me a beautiful mega-church. It's not that the size of those churches that prohibits beautiful architecture. It's also the theology of those churches. Can you imagine Joel Osteen's vision of a beautiful church? It'd be a mix of florescent lights and video screens with an alter at every exit to the almighty dollar. We've already seen one mega-pastor's vision (which probably didn't include bankruptcy...) and it wrought upon us the Crystal Cathedral, a cavernous and angular mess without a face and with poor proportions. More fitting for the set of Superman 2 than for Southern California. 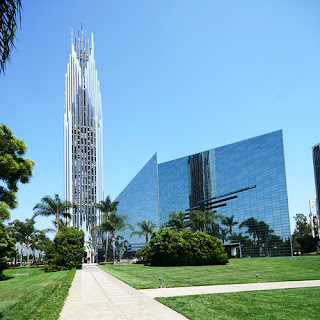 Even supposed traditional churches don't want to be bothered with good traditional architecture. See, for example, Thomas Road Baptist Church in Lynchburg Virginia. It's a old warehouse with pillars plastered to the front. But when you get inside, it's a theater. Traditional facade, modern interior. No beauty nowhere. 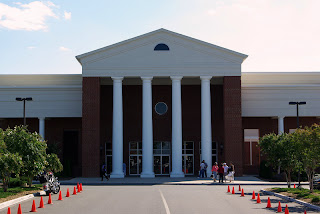 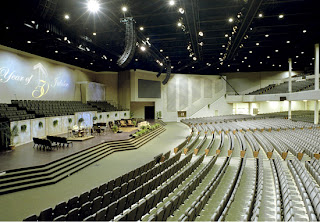 But the evangelical mega-churches aren't the only problem. Small churches also mock the need for architectural decency, instead opting for cheap materials and steel buildings. (I don't buy the excuse that churches can't afford anything else... we're far richer in 2012 than we were in 1812.) 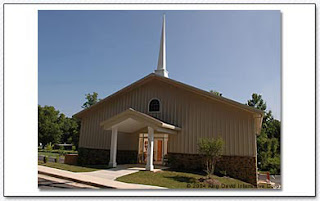 Without any group leading the charge for responsible church architecture, the modern architects gain power and create lifeless spaces. 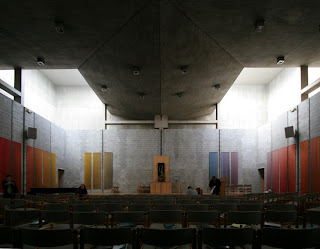 So then, what's the solution? I can only think of one thing, and it's to move forward by looking backward. Back to architecture that took into consideration Christian theology instead of costs and comfort. (Yeah, costs will always be a factor. But they shouldn't be the sole factor.) Back to architecture that reflected the beauty of God and the beauty of Christianity. 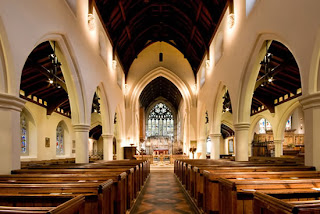 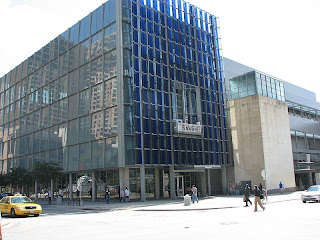 That's bad enough, but just wait until you see the back. I don't know what the hell is going on here, but it's just a clusterfuck of stairs. I don't think I've ever seen anything like this. The poor design results in an eyesore that can be seen from the neighboring restaurants who, despite the probable benefit of being next to the convention center, have to deal with the worst view in Austin. 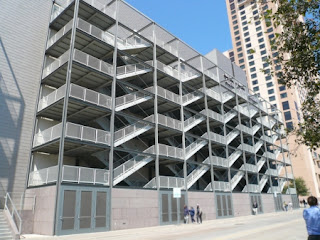 Posted by Royal Tenenbaum at 9:59 AM 3 comments:

For now I'd like to focus on Austin. I live here and there are some really, really great buildings here. But there's also the bad side: the ugly, imposing modern buildings.

In particular, there are two buildings associated with Wells Fargo. The first is at 101 Congress, right near the Congress bridge and across the street from the equally hideous Radisson Hotel. The picture really doesn't do it justice - it's worse than it looks. It's wide as hell, and it looks like a pyramid built with a bunch of shit-colored legos. 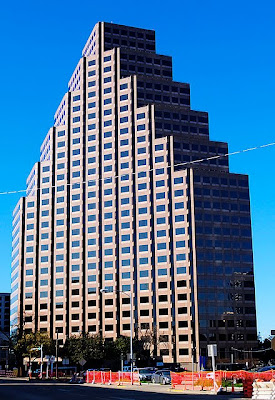 Even worse is the Wells Fargo building up near 15th and San Antonio: 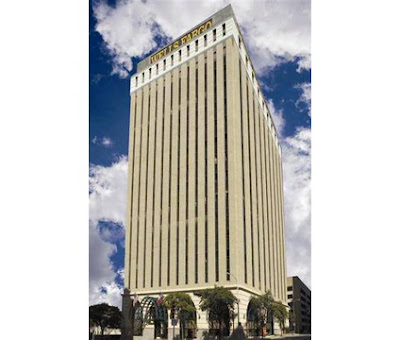 Posted by Royal Tenenbaum at 3:09 PM No comments:

This is what happens when a developer with no taste (Ratner) hires an architect (Frank Gehry) whose deconstruction and whimsy is old news. You get an undulating building, an eyesore on the New York City skyline. It's new and already dated.
Posted by Royal Tenenbaum at 2:01 PM 3 comments:

Texas Courthouses - the Old and New 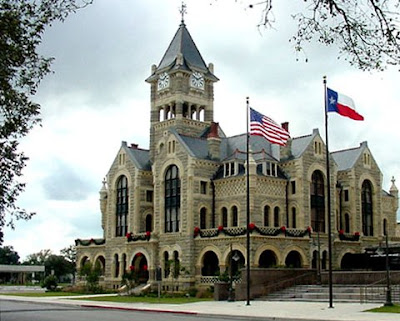 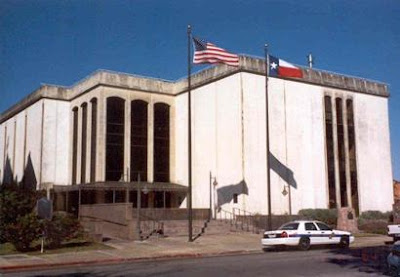 Spot On - Ann Althouse on Albany 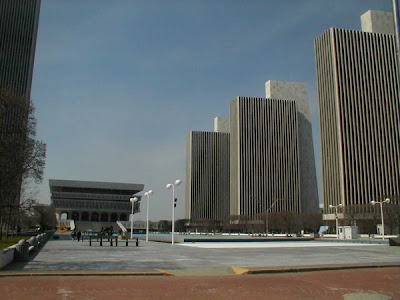 Ann Althouse on the atrocity that is Empire State Plaza